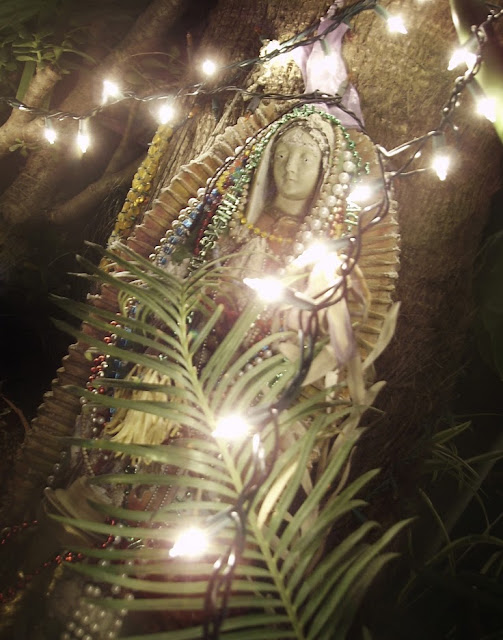 Every year on Dec. 12, I go to The Mission in San Francisco with a camera hoping to make a gorgeous picture of her - who Roman Catholics now know as "Our Lady of Guadalupe".  Previously, she was known as "Tonantzin" which in Aztec culture means "Our Revered Mother,"  although this general name may have encompassed all of the following:  "'Mother Earth', the 'Goddess of Sustenance', 'Honored Grandmother', 'Snake', 'Bringer of Maize', 'Mother of Corn'" and many many more.
Why do I look forward to the feast day of Our Lady of Guadalupe on Dec. 12 every year, when I fancy myself a person who has "thrown off the trappings of corporate Christianity"?  I gladly left Catholicism and Christianity behind the day I no longer needed the promise of a "heaven" or an "eternity" afterwards. I decided not to fear death.   Who needs all that baggage of religion if you're not bothered by the possibilities that souls may or may not be immortal?  I don't know what happens to us after we die, and no one else does either.  This doesn't scare me.  I've chosen to not fear the fact that one day, I may cease to exist forever; as if I had never existed at all.  And this could come to pass at any moment!  So what.  Life is so unfathomably meaningful to me in this present moment!  Life is so full NOW, that it doesn't matter if it may hold nothing tomorrow.  I digress, this is another discussion entirely.
I think my affinity for The Brown Lady stems from empathy deep in my heart.  I've always been a Mama's boy.  I've never loved anyone like I love my mother, literally (my Mom and all the motherly figures I have in my life) and figuratively (Mother Earth).
Mom raised me to be a lover, not a fighter.
On my empathy, concerning:  1- women, 2- brown people, and 3- morals. All of which are repressed in our current age.
1- The Feminine Principle- As opposed to the rule of the Patriarchal Principal that represents domination, war, unmitigated destruction etc.
2- The fact that entire cultures in the Americas were wiped out by Europeans- and that now, some "U.S. Americans" actually have the BALLS (if not pure ignorance) to refer to Mexicans as "illegal" while standing on that same exact soil that natives were once rightfully sustained by and then exterminated on.
3- The raping of the planet.  This is the most perplexing moral issue to me of all: Acting against our own self interest as if on some meaningless suicide mission.
So perhaps I take comfort in THIS mythology:  A feminine entity cloaked in light, surrounded by stars: one who nurtures and brings life; one who embraces all peoples, the natives and their dignity.  She reminds us to honor the Good Earth, to  respect the dirt under our feet.  This is Gratitude.  This is Love.  That's what she is to me, this Our Lady of Guadalupe - all these things wrapped into one myth.  Even if it is a myth I've chosen to replace another, it is something I've chosen for myself.
Posted by Norm Halm at 4:04 PM 1 comment: